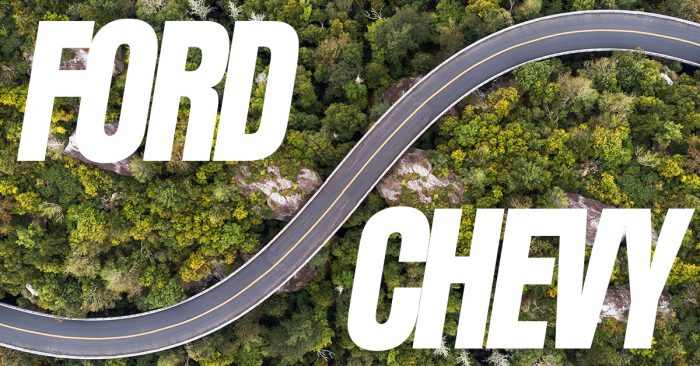 There are some great rivalries throughout history. The Hatfield’s and McCoy’s, Ohio State-Michigan, and even Pepsi and Coke. McDonald’s has its Burger King and Apple has Android. In the automotive industry, there was perhaps no bigger rival than the one between Ford and Chevy.

The Ford and Chevy rivalry goes back over a hundred years to the early 1900s. At about the time Henry Ford was revolutionizing the auto industry with the assembly line and the Model T, Will Durant was fired from General Motors and teamed up with a race car driver by the name of Louis Chevrolet.

The Durant/Chevrolet team proved to be so successful and powerful, they actually took over GM and incorporated Chevy into the company. The rivalry really was fueled in 1928 when Chevy debuted a more powerful engine than Ford and promoted it as such. It was a corporate “Nana Booboo” and the rivalry was on.

The rivals were at it again in 1957 when both Ford and Chevy created legendary vehicles with Ford outselling the Chevy. At the time, Chevy had the Corvette and Ford had the T-bird. Ford caught Chevy off balance with the Mustang in 1964, and it wasn’t until 1967 Chevy responded with the Camaro.

In spite of the success of the Mustang, Chevy outsold Ford in the 1960s to continue the rivalry. Rumors swirled that each camp had corporate spies working for the other company. One move was matched by another.

Today, the rivalry has moved into the truck segment with the Ford F-150 still holding on to the lion’s share of the full size truck market.

The Ford-Chevy rivalry had entire families declaring themselves as “Ford families” or “Chevy families”. It led to the expression from Chevy owners that Ford stood for “Fix or repair daily”.

The rivalry isn’t quite as intense today as consumers have more choices from more manufacturers. You will still occasionally see a window sticker, however, declaring a truck owner’s brand loyalty and disdain for the competition.

While the brand of your vehicle will impact insurance rates, it is not the defining factor. See how things like your age, driving record and even credit rating impact car insurance premiums by contacting one of our independent car insurance agents to get a no obligation quote. They can get quotes from multiple companies giving you more options. Contact us today for your quote.